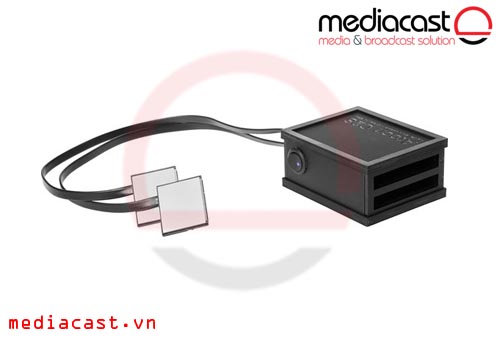 The C2S CFast to SSD Solution from Atoch allows users of the 4K & 4.6K versions of the Blackmagic URSA and URSA Mini to record footage captured by their camera directly onto SSDs, as compared to CFast cards. Operating as a "digital bulk loader," the C2S has two 2.5" / 9.5mm SATA drive bays, each of which is equipped with a wired CFast adapter that plugs directly into each of the URSA or URSA Mini's CFast card slots. Each 2.5" drive bay supports SSDs up to 2TB, for a total storage capacity of 4TB, or the equivalent of 16 x 256GB CFast cards. Not only will the C2S negate the need to carry around multiple CFast cards, users will also be able to swap out drive media less frequently, as larger capacity SSDs are a more cost-effective purchase than CFast cards.

In dual card mode, the C2S supports up to 4.6K RAW recording at 60 fps. In single card mode, the C2S is able to record compressed RAW video at any resolution at all available compression levels, which are 3:1 for the 4K sensor and both 3:1 and 4:1 for the 4.6K sensor, as well as all available resolutions and frame rates of Apple ProRes. Additionally, when used with Atoch's recommended SSDs, the C2S supports a greater maximum data rate than the 4.6K version of the URSA and URSA Mini are designed to output.

The Atoch C2S has helped to trim costs and streamline post-production workflows for many productions. This device is powered using the included D-Tap to DC cable and for those who wish to use 7mm SSDs within the C2S' 9.5mm drive bays, two SSD spacers are also included.

In-Camera SSD Control
Use your camera's user interface to format, record, and playback your footage just like you would with a CFast card. Even though CFast card sizes are limited, your URSA or URSA Mini won't know the difference between your inserted SSDs and a CFast card inside the camera, even all the way up to 2TB

Universal Ergonomics
With a 0.25" threaded mount on the underside of the Atoch C2S, it can be mounted as easily as almost any field monitor or external recorder. And with the use of a magic arm, the Atoch C2S can be swung around to nearly any position around the camera for improved ease of use for virtually any shooting circumstance. No need to permanently make your camera longer or wider, possibly making your shooting experience unwieldy, or causing issues on a gimbal. With your choice of magic arm or ball mount, your Atoch C2S is configurable to your specific shooting style

Universal Power
The Atoch C2S takes 12-24V directly and Atoch supplies a D-Tap cable so users can connect it directly to their battery or battery plate; whether you use Gold Mount or V-Lock batteries, the Atoch C2S can be powered with ease. With an LED-verified power switch, users can also see when their Atoch C2S is functioning properly, and even switch it off to save power

Fanless Cooling
Designed with audio in mind, the Atoch C2S helps keep your SSDs cool by allowing natural air to pass over and under your drives. There is no need for any additional power drain from powering noisy fans

Secure Drive Grip
Inside of the Atoch C2S is a SATA connector which grips SSDs tightly and without risking damage to its pins. There is no need to worry about SSDs falling out or remounting them when they've been jostled or bumped on set. The Atoch C2S is well suited for run and gun productions