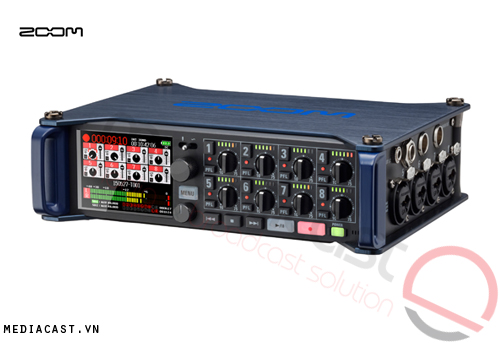 The Zoom F8 Multi-Track Field Recorder is designed for professional and enthusiast recording applications on set and in the field, including music, filmmaking, and electronics news gathering (ENG). Designed to be carried by a shoulder strap or in a bag, the unit features eight analog input channels with lockable XLR/TRS combo jacks that provide +75 dB maximum input gain, and support for +4 dB inputs with an EIN of -127 dBu or less. It can record up to 10 tracks simultaneously (channels 1-8 plus a stereo mix), or up to eight channels when recording at the A/D converter's maximum 24-bit 192 kHz resolution.

Alternatively, you can perform dual-channel recording of separate files at lower volume levels to ensure you have backup recordings to use when unexpected loud noises distort the primary recording. A newly designed limiter provides up to 10 dB of headroom. The unit supports SMPTE time code input and output. Included in the outputs is a powerful 100 mW + 100 mW headphone jacks as well as the MAIN OUT 1/2 and SUB OUT 1/2 jacks so you can send the audio signal to a video camera or other device while monitoring with headphones.

The unit's internal mixing capability enables flexible routing, and the inclusion of individually selectable +24V/+48V phantom power ensures you can use your favorite condenser microphones.

Power to the recorder can be supplied in one of three ways: via AA batteries, an AC adapter, or a 9 to 16V external DC power supply. Two SDXC card slots can be used simultaneously for recording even longer sessions, and can also be used as card readers when connected to a computer via USB.

When operating via USB, the unit can be used in a 2-in/2-out configuration as well as an 8-in/4-out audio interface (driver required for windows). A built-in slate mic allows you to make voice memos and the unit's slate tone can be used to confirm specific levels.

Among the most innovative features of the recorder is support for the company's interchangeable microphone capsules.

Audio Resolution
Records up to 192 kHz at 24-bit resolution

Simultaneous Recording
Records up to 10 tracks simultaneously with channels 1-8 and a stereo mix (left and right). Up to eight tracks can be recorded at a sampling rate of 192 kHz

Supports SMPTE Timecode I/O
Uses a high-precision oscillator that enables the generation of accurate time code with a discrepancy of less than 0.2 frames per 24 hours

Three Possible Power Supplies
Can operate on AA batteries, an AC adaptor, or a 9 to 16 V external DC power supply (not included) with automatic switching between power supplies

Two SDXC Card Slots
Allows for SD card recording, and the use of SDXC cards enables extended recording capability. The unit can also be used as a card reader by connecting it to a computer via USB