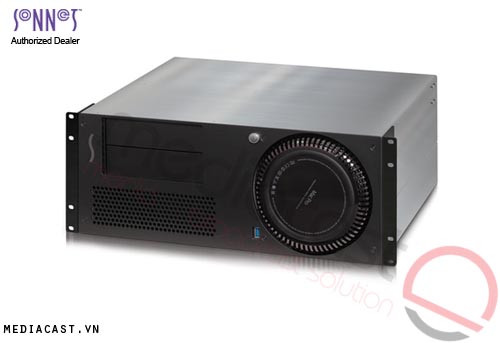 The xMac Pro server supports three full-length PCIe cards. It has a universal 300W power supply and includes a 75W PCIe power connector for cards that require supplementary power, such as the Avid Pro Tools|HDX or the new RED ROCKET-X. The xMac Pro server is eco-friendly, as it automatically powers the PCIe expansion system on or off whenever the connected computer powers on or wakes, or powers off or sleeps, respectively.

Provides PCIe Card Expansion for Mac Pro
Constructed of heavy-duty steel, xMac Pro server's outer enclosure provides secure mounting and protection for the computer and PCIe cards installed inside. Hidden behind a front panel, both the computer and PCIe card expansion system reside in separate modules to simplify setup and maintenance, allowing you to work with computer or cards individually. A protective cocoon of steel with soft touch padding to hold the Mac Pro firmly in place, while protecting its mirror finish. There is leftover space in the enclosure, suitable for mounting additional equipment such as hard disk drives, solid state drives, a tape drive, optical drive, or even a Qio MR pro media reader

Makes Your Mac Pro Road-Ready
4U rackmount enclosure securely holds the computer and PCIe cards in place, adding mobility to the Mac

Power for High Performance PCIe Cards
Integrated 300W power supply provides optimal power for any card you install; 75W auxiliary PCIe power connector enables use of cards that consume lot of power, such as the Avid Pro Tools|HDX or the RED ROCKET-X

Cool, Quiet Operator
The Mac Pro's cylindrical core is topped with a single large fan that quietly and efficiently cools the computer, drawing in cool air through the bottom and expelling warm air through the top. Mounted on its side inside xMac Pro server, the computer's airflow path remains unchanged and unobstructed; full, independent airflow through the computer is maintained according to Apple's specifications. The xMac Pro server was designed to be quiet so that it can be comfortably used in noise-sensitive environments The PCIe card expansion system is cooled separately with dual, ultra-quiet, and temperature-controlled fans. Its fans vent warm air through custom Venturi openings with low form-drag grills, resulting in reduced air velocity, turbulence, and fan noise. The fans have variable-speed. The computer-modeled airflow management ensures that even hot-running cards and chassis components remain cool, without the need to install an extra PCIe blower card that would prevent the use of one of the three slots

Front Panel Operation, Rear Panel Connectivity
The xMac Pro server front panel mounted power switch turns the computer on and off without the need for you to reach around the back. The front panel USB 3.0 port connects to the Mac Pro, enabling you to connect a keyboard, a mouse, or a thumb drive to the computer, without having to access its ports from the back. Other Mac Pro interface ports are extended to the back of the chassis and mounted on the rear panel for convenient interfacing of the remaining connections: Gigabit Ethernet, HDMI, and USB 3.0 cables, as well as the power cord. Holes for cable ties enable you to secure cables inside, keeping them clutter-free, while avoiding accidental disconnects An included Thunderbolt cable connects one of the Mac Pro's Thunderbolt 2 port to one of xMac Pro server's Thunderbolt ports, linking the PCIe slots to the computer. xMac Pro server's additional Thunderbolt port supports daisy chaining Thunderbolt peripherals such as additional PCIe expansion, pro video breakout boxes, video capture and playback devices, audio I/O devices, and more. The xMac Pro server includes adjustable and removable rackmount extension rails that allow the enclosure to be installed securely in a variety of racks from 16 to 26" deep

Energy Efficient
Variable-speed fans automatically adjust to the needs of each configuration, and the auto power on/off feature ensures that there is no energy wasted with cards powered on, when the Mac Pro is sleeping or is turned off

Thunderbolt Cable Lock Included
Sonnet includes a lock that secures the Thunderbolt cable connectors in place when plugged into the xMac Pro server. It is easy to install and prevents accidental cable disconnections