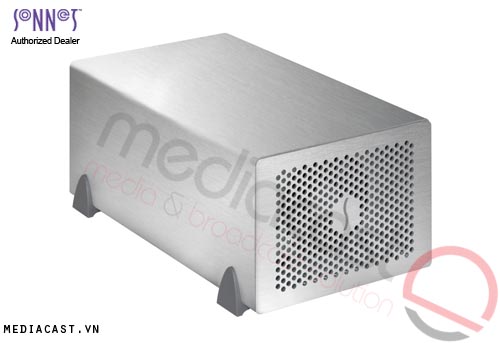 The Echo Express SE II Thunderbolt 2 Expansion Chassis for PCIe Cards from Sonnet enables you to connect two high-performance, professional pro video capture and processing, DSP accelerator, FireWire, RAID controller, Gigabit Ethernet, eSATA, or any other PCIe card to any Mac with a Thunderbolt 2 port. Accomodating cards of up to 7.75 inches in length, this compact expansion chassis supports a large variety of Thunderbolt-compatible PCIe cards on the market, even double-width cards, which is a PCIe card combined with a daughter card.

Two PCIe 2.0 Slots Plus Space for a Daughter Card
The Echo Express SE II has two PCIe 2.0 x8 slots, which support two half-length+ (up to 7.75" long), full-height, single-width PCIe cards. You can also opt for a one single-width card plus one double-width card. Some specialty cards, such as RME's HDSPe MADI FX card, Blackmagic Design's DeckLink 4K Extreme, and the Lynx AES16e 50, include a daughter card that mates with and provides additional external connections to the main card. The daughter card occupies the adjacent PCIe card space without filling a slot. The Echo Express SE II accommodates a daughter card's installation without wasting a slot

Cool Design - Outside and In
The Echo Express SE II's aluminum outer shell securely protects the cards inside and helps transfer heat away from them. The large and quiet, temperature-controlled fan automatically speeds up and slows down smoothly as needed, so there's no need to guess which switch position to select. The enclosure is ventilated front, back, and bottom to facilitate airflow over the cards