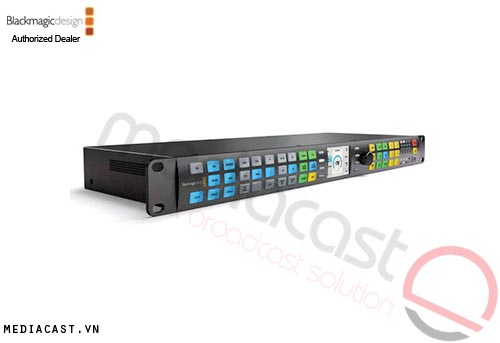 04.3652.1316 để có giá tốt nhất.
The Blackmagic-Design Teranex 3D Processor is an advanced-quality standards converter as well as video format converter and capture and playback device all-in-one. As a standards converter, it can convert from most any television format to any other television format in the highest quality. Conversions are indistinguishable from the original master. And as for capture/playback functionality, the Teranex can simultaneously convert formats and -- via Thunderbolt -- capture files into a computer for editing.

3D Processing
The Teranex 3D Processor includes dual SDI channels so it allows all video conversion to be locked together perfectly between channels. Only Teranex lets you process both left and right eyes in full resolution and in absolute sync.

3D Conversions
With so many types of 3D formats available, it's vital to be able to convert between them quickly and easily. The Teranex 3D model lets you convert using dual stream full resolution, side by side, and top and bottom 3D formats with ease.

3D Simulation
Take 2D feeds into a 3D live production, or convert 2D content into 3D with the Teranex 3D simulator! The patent pending 3D simulator will convert any SD or HD content into amazing dual stream 3D that needs to be seen to be believed.

3D Camera Align
The 3D camera align feature of the Teranex 3D Processor lets you frame sync even unlocked left and right eye signals and fix geometry errors in the camera rig. You can even correct the alignment of two consumer cameras for incredible 3D images.

High Quality De-Interlace
Teranex quality starts with one of the world's highest quality and most precise de-interlacers. Teranex features proprietary and patented PixelMotion de-interlacing algorithms so you get improved image quality by maintaining vertical resolution.

Cadence Detect and Remove
Teranex is unique because it can automatically remove cadence (3:2 pulldown) from video when converting 24 fps, even when the footage has been previously edited and suffers from flash fields. That's perfect for mastering clean online content.