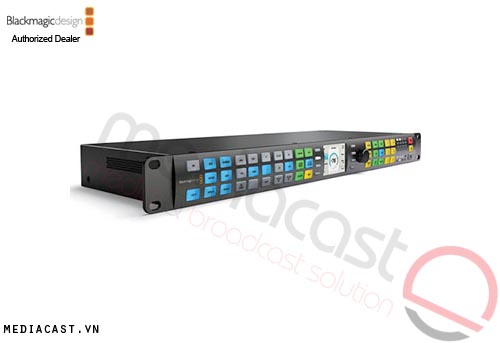 04.3652.1316 để có giá tốt nhất.
The Blackmagic-Design Teranex 2D Processor is an advanced-quality standards converter as well as video format converter and capture and playback device all-in-one. As a standards converter, it can convert from most any television format to any other television format in the highest quality. Conversions are indistinguishable from the original master. And as for capture/playback functionality, the Teranex can simultaneously convert formats and -- via Thunderbolt -- capture files into a computer for editing.

High Quality De-Interlace.
Teranex quality starts with one of the world's highest quality and most precise de-interlacers. Teranex features proprietary and patented PixelMotion de-interlacing algorithms so you get improved image quality by maintaining vertical resolution.

Cadence Detect and Remove
Teranex is unique because it can automatically remove cadence (3:2 pull down) from video when converting 24 fps, even when the footage has been previously edited and suffers from flash fields. That's perfect for mastering clean online content.

Mandated by Broadcasters
Teranex processing is so well known for quality that it has been mandated by major studios and many US broadcast networks for all master conversions when distributing content for worldwide delivery.