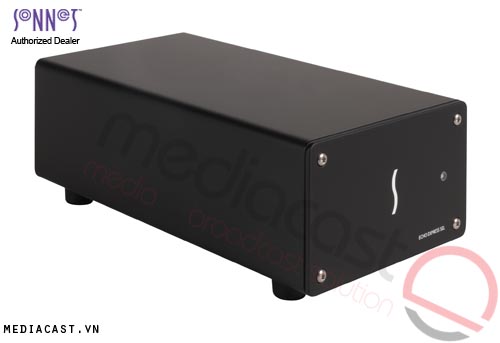 The SEL is enabled by Thunderbolt technology, allowing PCIe expansion slots to be connected outside a computer. This compact desktop Thunderbolt 2 to PCIe card expansion chassis is suitable for connecting one professional 16Gb or 8Gb Fibre Channel, 10 Gigabit Ethernet, SAS/SATA host bus adapter or RAID controller PCIe card to any Mac with a Thunderbolt port.

Two Thunderbolt Ports
Daisy-chain up to six devices to a single port on the host computer.

Quiet Cooling
The Echo Express SEL is designed to be quiet so that it can comfortably be used in noise-sensitive environments. The airflow path within the chassis has been specially designed to quietly and efficiently cool the installed card with a temperature controlled, variable speed fan.

Energy Saver Mode
It features automatic power on/off to save energy. Since Echo Express products automatically power on and off with your computer, there is no power switch on the chassis.

Rugged Aluminum Housing
Constructed of rugged and lightweight aluminum, the outer shell of the Echo Express SEL securely protects the PCIe card installed inside. The variable speed, temperature controlled fan automatically speeds up as necessary to ensure that even a hot running card and the chassis's components remain reliably cool. Because the fan automatically speeds up and slows down as needed, there is no guesswork in setting a switch position, and no need for tools to change settings.

Full Performance in a Small and Light Package
The Echo Express SEL is small, light, and suitable for use in situations where only a single low profile PCIe card is needed. Measuring a scant 4" wide by 8.4" long by 2.8" tall, the SEL is designed to house one low profile PCIe card including compatible high speed networking and storage controller cards. The SEL includes two Thunderbolt ports to support daisy chaining of up to six devices from a single port, on your computer.