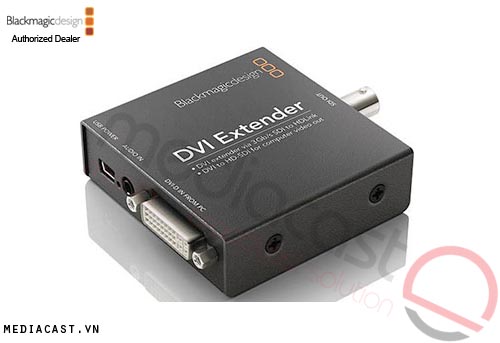 04.3652.1316 để có giá tốt nhất.
Now you can route your computer monitor via your SDI router! The Blackmagic HDLEXT-DVI DVI Extender lets you can extend the DVI-D connection to your computer monitor via simple SDI cables! Now it's much easier to connect your computer displays anywhere in your facility, or even to more than one monitor when using any 3 Gb/s SDI router. DVI Extender also works as a regular DVI to SD/HD-SDI video converter, that's perfect for broadcast graphics!

Route Your Computer Monitor
Imagine the creative freedom to design your facility the way you want! Now you can move noisy computers out of client rooms plus you can even have a duplicate computer monitor for your client to watch! DVI Extender is easy to use and plugs into an HDLink Pro or HDLink Optical Fiber converter at the other end of the monitor extension. This means you can use a single monitor for either computer or video monitoring!

Built in SDI Audio Embedding
DVI Extender includes a standard 3.5mm audio mini jack input so you can connect audio from your computer! That means you get full 3D accelerated graphics and audio from your computer to SDI. That's a perfect solution for digital signage, Flash playback, PowerPoint, gaming and more! Now any software can be output to crystal clear SDI video!

Convert DVI to SDI Video
With DVI Extender, you can harness your computer's built in 3D accelerated display to create realtime broadcast graphics in standard definition and high definition video. Simply set the control panel to Video Output and DVI extender will output NTSC, PAL, 720 HD or 1080 HD resolution SDI video with embedded audio from your computer via the audio input jack.

Full Digital Quality
Unlike older scan converters, DVI Extender is a fully digital converter that connects the DVI-D output on your computer to SDI equipment such as HDLink Pro. That's a direct pixel-for-pixel digital connection to SDI, which is the highest quality possible and eliminates all scaling problems!

Powers From Any USB Port
DVI Extender does not need messy power supplies because it connects directly to any USB port on your computer. That's ideal for portable use, because DVI Extender can be powered directly from your laptop. Or you could even use a portable iPod USB power supply!