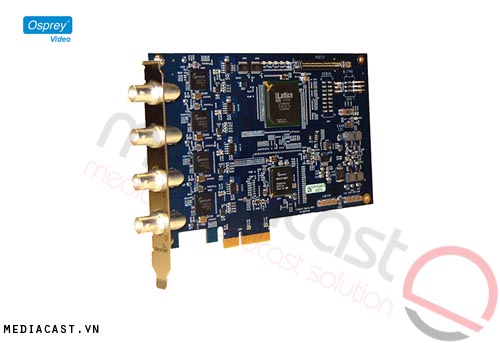 The Osprey 845e is a versatile card that can be used for a wide range of applications, such as recording multiple streams of video to a computer or live streaming multi-camera productions. For Windows users, the card features drivers that expose it to the Microsoft DirectShow API, Windows' media device interface framework. This means that card is compatible with most Windows-based software that is capable of capturing or streaming video.

For Linux users, there are a wide range of Open Source software options available via the Linux distribution's package manager or as source code from GitHub and other repositories. In addition, users looking for custom solutions can develop their own software using the software developer kit (SDK), which can tailored for unique applications.

Because of the high data-rates involved in multi-channel video capture, it is important to consider the computer that will be used. While the exact system requirements will vary depending on the specific capture or streaming software that will be used, a quad-processor or better workstation computer with a direct- or North Bridge-connected x8 PCIe slot will likely be required.