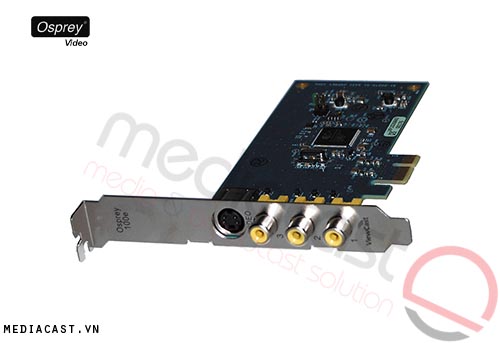 04.3652.1316 để có giá tốt nhất.
The Osprey 100e is a composite video capture card for Windows and Linux. It features three RCA composite and one S-video input with software-based switching that allows you to toggle between sources. It will only capture on channel at a time and does not have an audio input.

The Osprey 100e is useful for applications such as surveillance where you need the ability to access up to four channels but only record one channel at a time. For Windows, the card features drivers that expose it to the Microsoft DirectShow API, Windows' media device interface framework. This means that card is compatible with most Windows-based software that is capable of capturing or streaming video. For Linux users, there are a wide range of Open Source software options available via the Linux distribution's package manager or as source code from GitHub and other repositories. In addition, users looking for custom solutions can develop their own software using the software developer kit (SDK), which can be tailored for unique applications.