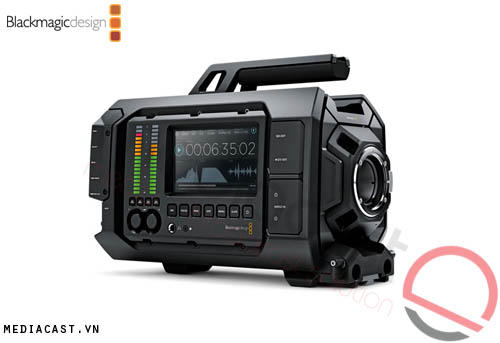 04.3652.1316 để có giá tốt nhất.
The URSA 4K Digital Cinema Camera with active EF Mount ( /PL Mount ) from Blackmagic Design features a form factor that is designed to make it flexible enough to use on productions of all sizes. From a single operator all the way up to a full camera crew. At the heat of the imaging system, URSA features a 3840 x 2160 resolution, global shutter CMOS sensor with 12 stops of dynamic range. The camera records and outputs in the 2160p format, a 16:9 standard with precisely four times the resolution of 1080p, often referred to as UltraHD.

Internally, URSA can record in the two formats. The first is 12-bit CinemaDNG RAW, a losslessly compressed RAW codec designed to give you the greatest latitude for image manipulation in post production. The second is Apple Pro Res 422 (HQ), a debayered codec for easier playback and editing in a wide range of video editing applications. Additionally, ProRes also requires less storage space for extended recording times. Video is recorded to CFast 2.0 memory cards, and the camera features two slots allowing you to hot swap media for continuous, uninterrupted recording.

URSA features a 10.1", 1080p resolution flip-out LCD screen so that you won't necessarily need an on-camera monitor. Additionally, there are two 5" capacitive touchscreens, one on either side of the body. These allow you to access the menu system and can display data such as timecode and audio waveforms.

So you can edit and color correct your footage, especially footage shot in the CinemaDNG RAW format, URSA includes DaVinci Resolve software for OS X and Windows.

Supports Diverse User Groups
From solo camera operator up to full-scale productions. When used on jobs with a large crew, you can easily dress the camera with high quality cinema lenses, rods, follow focus, matte box, and more. If you're shooting solo, then the large fold out on-set monitor, built in scopes, and internal recorder means you don't need any extra on-set equipment because it's all built into the camera.

Professional Design and Aluminum Construction
URSA features an active cooling system with low noise fan that allows it to achieve higher frame rates for longer while keeping the chassis cool. The machined aluminum design is built to incredibly robust and has been engineered with the possibility it will be handled by lots of people in mind.

Super35-Sized Global Shutter CMOS Sensor
The 3840 x 2160 native resolution censor uses a global shutter so that it will be free from the motion artifacts and flash banding experienced with rolling shutter sensors. It features a wide, 12 stop dynamic range to help ensure detail is retained even in the shadow and highlight portions of the image and to provide more information to work with in color correction. The sensor size makes it possible to recreate the shallow depth of field look popularly associated with film. At this size it is slightly larger than the APS-C DSLR format and will accommodate most lenses that cover an APS-C image circle.

Dual CFast 2.0 Card Slots
With two cards slots, it is possible to keep recording indefinitely. Simply switch over to a fresh card in the second slot and then remote the first to offload to a computer or storage device. By using CFast 2.0 media it is possible to record even at the high bitrates demanded by RAW capture without dropping frames.

Built-In Scopes
URSA features scopes for exposure, focus, and audio levels. And there is a dedicated screen for camera assistants so they can check and update camera parameters independently of the camera operator.

Field Upgradable Sensor
The URSA features a modular camera turret that can be removed by taking out four bolts. The camera turret includes the sensor, lens mount, and lens control connections and can be upgraded in the future when new types of sensors are developed

Broadcast Connections
Standard BNC connectors mean you don't need to worry about custom or proprietary cabling solutions. URSA features a 12G-SDI output that can be down converted to HD or used directly for full Ultra HD 4K quality. There's also a 12G-SDI input that can display return video on the 10" LCD when covering live events or working with external video sources. A separate SDI output that outputs 1080p only is available for attaching EVFs and monitors. For audio, there are two XLR inputs with +48 V phantom power. You also get timecode in and out to help synchronize with other cameras or separate audio recorders.

LANC Port
A LANC is provided on a 2.5 mm sub mini connector. It allows you to control record START/STOP, iris, and focus.

Supports Standard Battery Plates
Your choice of Gold Mount or V-Mount battery plates can be attached directly to the back of the camera. Alternatively, there is a 4-pin XLR input so you can use a power supply or other DC power source. The URSA also features a 4-pin XLR power output so you can power a camera mounted 12V accessory without needing an additional battery.

Lots of Mounting Points
The top of the camera features a number of 3/8"-16 tapped holes so you can attach articulating arms and other mounting accessories. There are also 1/4"-20 holes along the top of the removable handle. In addition, there is a mount for 15mm LWS-spaced rods built-in to the bottom of the camera. By adding a pair of standard 15mm rods you can add accessories such as follow focus and matte box. A V-lock delta interface allows the camera to be attached to tripods using an ENG-style quick release system such as the VCT-14

DaVinci Resolve Software Included
URSA includes full DaVinci Resolve 11 software for Mac and Windows, so you get more color correction features that let you take advantage of URSA's RAW recording capability. You can also use the Resolve Live feature to grade live video directly from the camera on set. You also get DaVinci Resolve's advanced editing features, including a full multi-layer timeline with ripple, roll, slide, slip clip trimming, and title tools.